Yes, there are microbes in space! We bring them there by accident on our hardware and ourselves, and we send them on purpose in order to study the effects of space stresses on biology, or to help sustain the life and health of human crew. My work at NASA touches all of these areas and encompasses a diverse set of microbiological sub-fields, including microbial viability for planetary protection concerns (are any microbial hitchhikers still alive on spacecraft we’ve sent to the Moon?), ecology of the International Space Station microbiome, microbe-plant interactions for space agriculture, microbial food safety in space, making space-related microbial cultures and data open for all researchers to access, and the effects of space stresses such as microgravity and radiation on microbial physiology. I welcome as many interns to work with me on these topics as I can, through the NASA Internship Program and the Ames Space Life Sciences Training Program. And I love talking with young learners about microbes… in space!

Microbes are, admittedly, relatively simple organisms: single cells, small genomes. We often assume that two microbial cells that have the same genome will behave in the same way if they’re in the same environment. But in reality, microbial populations are capable of generating surprising complexity even in when they’re composed of genetically identical individuals. This is sometimes due to interactions with each other or with the environment, but sometimes it’s simply stochastic! I’m curious about how this diversity– even the stochastic kind– can make a population better adapted to its environment. During my postdoctoral work, I discovered a phenomenon of phenotypic heterogeneity in tolerance to the toxin formaldehyde in populations of Methylobacterium extorquens. And with colleagues from the SFI Complex Systems Summer School, I used agent-based modeling to investigate when and how phenotypic heterogeneity can evolve in a microbial population (see details at the Pheno-Evo page!). You can read more about the surprising “individuality” of bacterial cells in a blog post I wrote in 2017, and in this article in Quanta Magazine, which featured my work and the work of many others.

Methylotrophs in ecology and evolution

The Methylobacterium and Methylorubrum are a group of plant-associated alphaproteobacteria that make a great system for studying microbial diversity. They’re best-known for the model organism M. extorquens, a pink leaf-dweller that has long been studied for its ability to live solely on single-carbon compounds such as methanol. However, members of this group are found all over the plant, are capable of metabolizing diverse growth substrates, and many contribute to plant growth promotion. During my postdoctoral work, I built a synthetic microbial community to degrade plant biomass, with methylotrophs playing an unusual role, and investigated the metabolism of lignin-derived aromatic compounds in Methylobacterium. I’ve also worked on a multi-institution research project using these genera to study the relationship between functional diversity and phylogenetic diversity in microbes, and how diverse microbial communities assemble on the plant host. This research was the basis for Methylothon, a project that uses our pink bacteria to bring microbial ecology into high school classrooms. 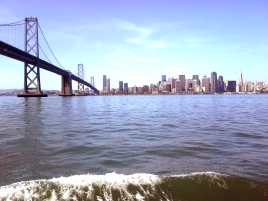 The nitrogen cycle is a critically important process in estuaries (as it is everywhere!), and estuarine sediment is a hotbed for dentrification—the microbial transformation of nitrate (a dissolved form of nitrogen that many organisms can make use of) to dinitrogen gas (78% of our atmosphere, and relatively inert). For my PhD thesis, I carried out an extensive survey, using quantitative PCR and next-generation sequencing, of the diversity and abundance of denitrifying bacteria in San Francisco Bay sediments. I followed communities as they changed over the seasons in several sites along the salinity gradient from the Delta to the Central Bay. Read more about the project here.